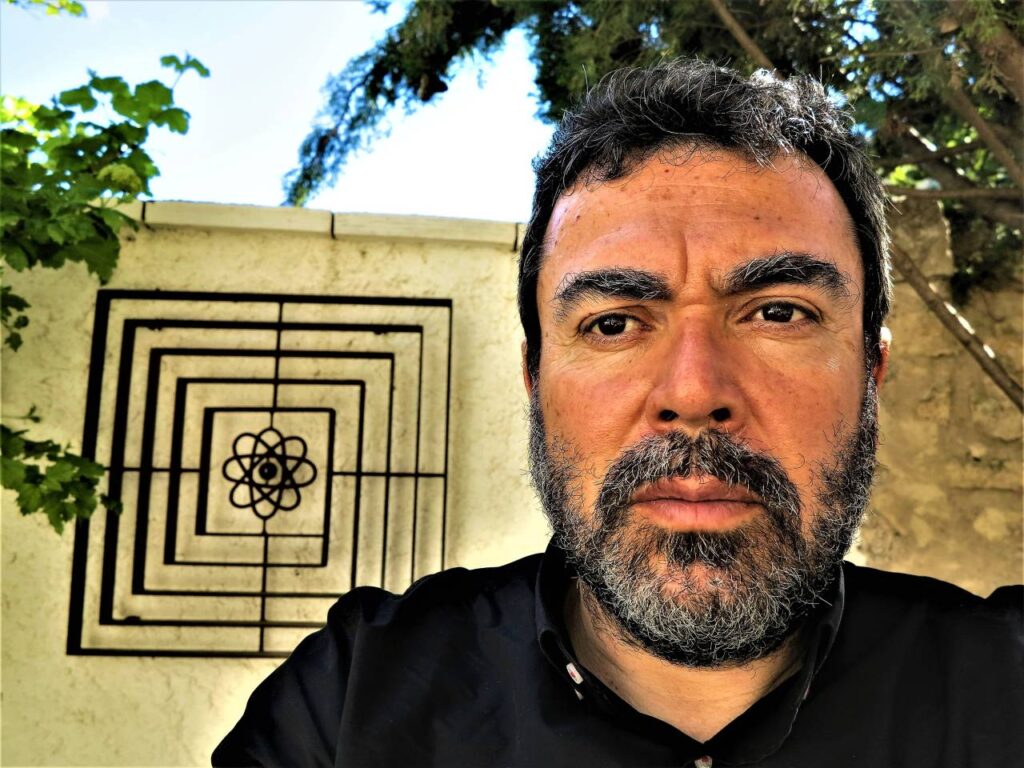 Since the mid nineties, Ansón has also been “diving” in art, swimming in the many various expressionist currents in the vast sea of trends in painting. In this, his second profession, he is a self taught painter who exhibited for the first time in 1992. He has lived surrounded by paintings, his father is a keen amateur artist, but has never had any formal Fine Art training, nor has he studied the history of art systematically. Great artists drink from their past, -remember that Picasso, both in his youth and in his old age, took on the great masters, El Greco, Rembrandt and Velázquez,- and José Luis Anson is no exception. Without going back in history, he takes the artistic heritage of his immediate predecessors, mainly the other outstanding Aragonese artist, Antonio Saura, absorbing the informal style of painting, while at the same time profes sing his great admiration for Antón Patiño and Anselm Kiefer.

Ansón is keen to experience all kinds of expressionist influences. And why Expressionism, in particular? We believe his effervescent personality, his vitality, his energy, and his inexhaustible, almost childlike curiosity do not allow him to follow a methodical, calm and controlled approach to art. He does not have the cold, calculating mind of the constructivist. His mind-set is open, pure, although an undercurrent of tension can be felt. Expressionism, in all its facets, is his starting point.

The path he has taken over the last six years reveals to us the initial inclination of Ansón towards painting absolutely everything exuberantly – canvasses, boxes, walls, stones, drums,- for the pure pleasure of painting. Filling every available space with paint. The sombre house which serves as Anson’s studio in Las Eras de Tosos illustrates this fact well: the stark bareness of the architecture of the house, surrounded by the barren Aragonese landscape, contrasts with the richness of the images found inside, a dread of emptiness, with icons scattered to every corner of this country house.

Painting serves as catharsis: the combination of the mind and the hand helps exorcise, bury and banish, thereby freeing the mind for a new life, making painting physical, literally transferring imagination onto the canvas. The physics of painting, the canvas as a great arena in which to perform (Jackson Pollock) or the torn canvas (Millares) and the bold gesture (Antonio Saura and the Cobra group) form a part of the legend of gestual and/or abstract Expressionism in contrast to the lyrical, poetic Expressionism more associated with France. Gestual and spontaneous Expressionism are facets which appeal to Ansón, Expressionist abstraction, with surrealist roots, blossomed after the horrors of the Second World War and the atomic bombs of Hiroshima and Nagasaki, questioning Man’s place in the world.

In this sometimes castrated society, which sile es its unfortunate welfare with huge neon signs saying “everything is all right, there’s no problem here”, Ansón, restless, seeks an escape through art like a diver in a cave with no return. Underlying all his work is the permanent darkness of the bottom of the sea. It transmits a feeling of condensed energy accompanied by eagerness and haste.

A much-loved book in Ansón’s library is The Temptations of Antonio Saura by Julián Ríos, which records conversations with Saura, highlighting the autobiographical and self-critical nature of the Aragonese painter’s work. Anson’s work is also autobiographical inasmuch as it turns to personal experience to find its iconography, in this case the underwater world, creating highly coloured, imaginary (not irrational) creatures, which remind us of a painter from the Cobra group, Karl Appel. It was the Dutch artist who said that a painter struggles with material to give form to the immaterial. Appel, like Miró, Klee and now Ansón, delights in the spontaneity, vitality and innocence of the childlike, primitive world. Ansón even paints the toys of his niece. We can recall that Saura only treats the human figure (the only animal which we know in his work is Goya’s dog) with his largely sombre palette. The series of portraits and self portraits of Saura, which are archetypal with large eyes, have proved a great inspiration to Ansón.

The artist admires the great complexity of Anselm Kiefer, his Germanic introspection and the investigation of the epic stories of Germany’s past. But what most immediately appeals to him, in this first pictorial stage, are the formal qualities of scale, texture and the third dimension incorpo rated into Kiefer’s paintings. Ansón emulates this in the series of wrinkled paintings with relief and texture, built up using polyester resin. Kiefer accepts the idea the modern artist living outside society, mocking, inciting and provoking it. Ansón, however, tries to work from inside a society of which he, sometimes, feels a part. He still hangs onto a sense of humour and does not have the alienation and self destruction of the Nordic and German expressionists. Ansón sees himself as a survivor, and from this viewpoint expresses his optimism and energy, together with, it is true, a criticism of the situation of mankind, without giving way to a criticism of a particular historical, political or moral situation.

His association with the group of artists and poets in Angel Maturén’s workshop in Tarazona has widened his horizons and led to new projects, like his plans for intervening in the Aragonese landscape, sculpting objects he has found or recycled, etc. Ansón is on a path towards a more abstract, serene style. The artist has obeyed his own counsel: Inside each and every one of us there lives a dark beast. Drive it out!

Do not let it live inside you and do not hypocritically believe that you are not like that, because you are, you are both a Beast and an Angel at the same time. Each creative act is an exorcism that you practise on yourself, on your soul, pagan liturgies, creation, God, a conversation between you and your maximum expression of creation.

New worlds will appear inside your soul, you will see things that nobody has seen, you will feel new emotions, because creation is a road without return that never ends.